It was a great day on Saturday, August 11 for the Heritage Farm Tractor Drive to help celebrate Vermilion County Farm Bureau's 100th anniversary. Farm broad- caster Max Armstrong led 53 tractors in a ride across central Vermilion County. The day culminated with a lunch in Lincoln Park in Danville. This video shows the tractors as they depart from the Vermilion County Fairgrounds.

Joan teaches 4th-6th grade Language Arts. She previously taught for 20 years in Danville District 118. She has utilized Ag in the Classroom for nearly all her 25 years of teaching in Danville. She came to Danville from the south Chicago suburbs 32 years ago, and admits she and her students alike have learned so much about farming and food through Ag in the Classroom.

Environmental action is an organizational priority for Illinois Farm Bureau.

Since 2015, IFB has committed over $1.5 million to support implementation of the Illinois Nutrient Loss

Reduction Strategy (NLRS). The IFB Nutrient Stewardship Grant Program is an example of how IFB and

possible. Instead, IFB worked to produce Virtual Field Days to

share the work of counties and their partners involved in the

Day video features a brief summary of the effort, video links to

Nearly 300 people attended the showing of Silo is the first-ever feature film about a grain entrapment.

several area businesses shown bottom right - were pleased to be able to present a free screening of the movie on Sunday, March 8. at the Fischer Theatre in downtown Danville.

Lawrence Parks, president of the Parks Companies, cuts the ribbon to celebrate the opening of the 8,200 head hog farm near Fithian. Nearly 400 community members, neighbors and ag representatives attended the open house on September 11 and enjoyed a pork chop or pork pattie sandwich.
Once filled, this hog farm will produce the equivalent of 1 million pork chops and 15 million slices of bacon per year.
Also pictured are (left to right) Phyllis Parks, Lawren Parks, Gabe Shepherd, Gary Parks, and Jennie Shepherd. The event was hosted in cooperation with the Shepherd and Rademacher families of Vermilion County.

Displays in the lobby prior to the movie had information about grain safety tubes, a grain entrapment demonstration, and current 4-H and DACC ag classes.

Following the movie, a brief panel discussion included (shown top right) Jason Risley with Premier Cooperative and Dave Newcomb. They talked about the current condition of stored grain, and entrapment procedures and preventative measures that need to be taken. The final speaker was Anita Howard, who told the story about her son being killed in a grain entrapment last fall in Montgomery County, IN. 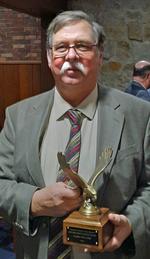 USDA Secretary Sonny Perdue stopped at the Georgetown Fair on Monday, August 7 as part of his "Back To Our Roots" RV Tour. He visited with farmers at the Farm Credit Illinois dinner, and made some brief remarks during the Open Steer show. He was joined by his wife, Mary, and Congressman John Shimkus.

Mark served on the Board of Directors for 18 years (1999-2016), including twelve as an officer. He has been a strong member recruiter. Mark is a great supporter of Ag in the Classroom, and volunteers with his wife, Susie, on the joint project with Douglas Discovery Garden. He is also chairman of the Vermilion County Farm Bureau Foundation.

Vermilion County Farm Bureau's Young Leaders Committee recently made a $500 donation to the Georgetown Township Food Pantry. The funds came from the IFB's Harvest for All program, which raises money through the sale of die-cast tractors and money from the American Farm Bureau YF&R Conference. 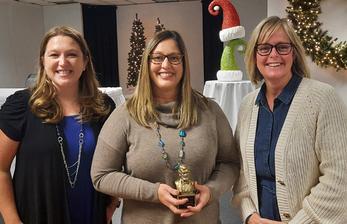 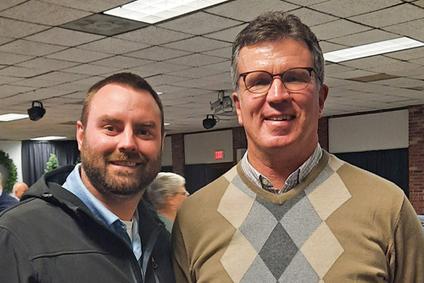 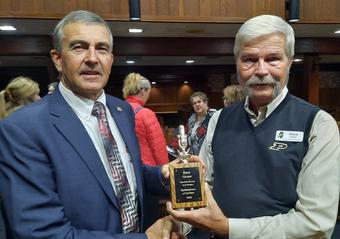 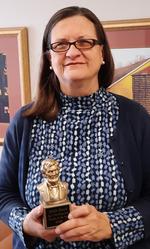 Destiny Swalve, ag teacher at Armstrong Township High School, was recently selected as one of four new agriculture teachers in Illinois to receive the Illinois Agriculture Education Teacher grant. The Illinois Farm Bureau program to encourage new ag education teachers presents grant payments to first year teachers  that apply. Grant payments increase over the course of the teacher’s first five years in the classroom, up to $10,000 total, if they meet the re-application process confirming they remain active as an agricultural education teacher in the state of Illinois. “I knew when I was a freshman I wanted to be an ag teacher,” Swalve said. She sees the value of agricultural education for her students. Congrats, Destiny! 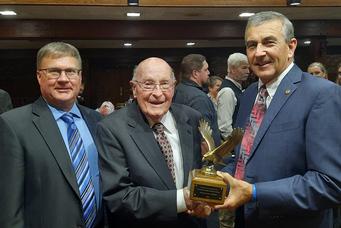 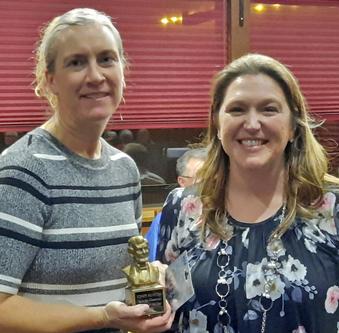 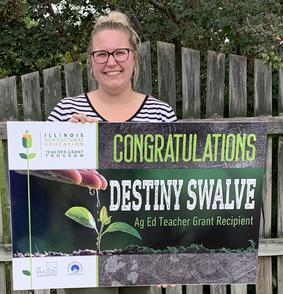 Lynn Rohrscheib, of Fairmount, was named the winner of the 2017 Illinois Farm Bureau’s Young Leader Achievement Award. The award recognizes young farmers who derive the majority of their income from farming for their efforts in production agriculture, leadership ability, and involvement and participation in Farm Bureau and other organizations.  A member of the Vermilion County Farm Bureau Young Leaders since 2003, Rohrscheib is actively involved in her local FFA alumni chapter, and served as a district director for the Illinois FFA Alumni. She is also Chairman of the Illinois Soybean Association board, having served on the board the past five years. Lynn Rohrscheib farms with her parents, Vernon and Mary, and her sister, Stacey, continuing quite a family legacy in production agriculture. Rohrscheib represents the fifth generation to farm on her father’s side of the family and at least sixth generation on her mother’s side. Rohrscheib will represent Illinois in competition at the American Farm Bureau Federation Annual Meeting in Nashville, TN next January.

Landowners across Vermilion County may have been contacted recently about two different issues involving property rights.

In one instance, a railroad company has sent out letters regarding private crossings. And others have received letters regarding an easement expansion request along overhead electric transmission lines. Any time you are presented a contract regarding property issues, you should always consult an attorney to ensure your rights are protected.   Click here for more information 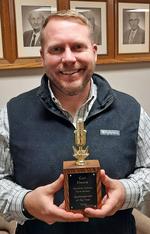 If you've been approaches about a solar project or other utility easement on your property, then Farm Bureau members should attend this Solar Project Information Meeting. Illinois Farm Bureau's director of regulatory affairs Rae Payne and attorney Garrett Thalgott have worked with these projects in other counties. They'll talk about the terms of a contract and items landowners should consider before signing an agreement.
Monday, July 17     1:30 pm     Farm Bureau Auditorium

Ag in the Classroom Teacher of the Year

Amber Tutwiler, a kindergarten teacher at Edison Elementary School in Danville was selected as this year's Ag in the Classroom Teacher of the Year. She has taught in Danville since 1998, the last ten at Edison. She regularly utilizes Ag in the Classroom, from presentations to ag kits. She also hatches eggs in her class every years and loves seeing the kids' excitement as the chicks emerge.

attendance. Dennis Smith presided over the meeting and

conducted the business, which included the election of

directors. Re-elected to the board were B.J. DeAth, Milton

(shown at left) Tyler Johnson and Greg Learnard. They are

replacing Allen Rutan and Trenton Seaman who have

completed their nine-year tenure on the board.

At the Annual Meeting, John Maudlin was selected as the Distinguished Service Award winner. His connect with Farm Bureau goes back to high school when he won an essay contest on 'Why My Dad Belongs to Farm Bureau.' Though never serving on the Farm Bureau Board, he has been an active and loyal member since 1957. He has served on the Legislative Commitee and participated in many events over those 70 years. He has been a support of the Foundation and youth education programs, and has served on the Vermilion County SWCD Board for 47 years.

Hats off to Vern and Lynn Rohrscheib for their efforts to collect and deliver nearly 240 round bales of hay to Kansas farmers and ranchers affected by wildfires. They also took a trailer load of 200 square bales, supplies, and a pallet of feed donated by Georgetown Ridge-Farm FFA. Thanks to all the area farmers that donated hay, trucks and money for fuel. As Lynn said, "Agriculture is a tight-knit community, and farmers are always willing to help those in need, whether it's down the road or across the country. 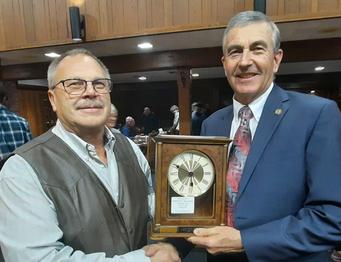 A great crowd of 160 Farm Bureau members attended the organization's 99th Annual Meeting on Tuesday, November 28, 2017 at the Beef House Banquet Center. Sue Richter, Executive Director of the Vermilion County Museum, gave a superb presentation on farm life in Vermilion County over the past 100 years.

in the Classroom Teacher of the Year Award. She takes her class of urban students to a farm

every year so they can know about farming and where their food comes from. She's shown

been involved with Farm Bureau since he was 16 years old, including 10 years

Curt was active with the Young Leaders Committee, and has been on the Board of Directors since 2015. He has written farming articles for The Sidell Reporter for 12 years, helping the non-farm public know about issues impacting agriculture. He has also participated in the Leaders to Washington program. 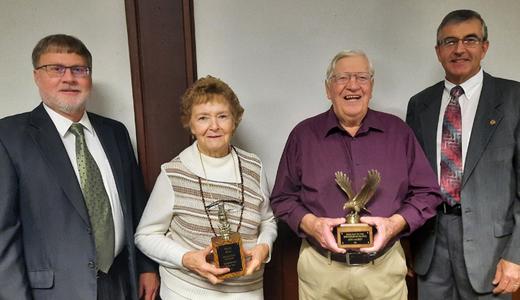 Newest Items are at the bottom of the page

Spokesperson of the Year Award

Also recognized was Phyllis Parks with the Spokesperon of the Year Award. Phyllis has been a part of agriculture nearly her entire life. From keeping books for their family's livestock and sale barn business to being a partner in an firm that specialized in farm accounting.

This lead to her second career as farm broadcaster at WITY  - her 'fun' job. She share's agriculture's story with her audience, from 4-Hers at county fairs to farm leaders at the Farm Progress Show.

Teacher of the Year

Vermilion County Farm Bureau held its 104th Annual Meeting on November 29, at the Beef House in Covington, IN. Nearly 90 people were on hand to hear reports and bid on Silent Auction items. During the meeting, awards were presented for Ag in the Classroom Teacher of the Year, Spokesperson of the Year and Farm Bureau Distinguished Service Award.

since 1953. He's shown at the center of the photo with Executive Director

Township representative on the FB board from 1987 to 1992, including

three years as Treasurer. His interest in local government (many years

Bureau’s Legislative and Local Affairs Committees, involved with many

activities and letter-writing campaigns. He has been a great connection between rural and urban interests, whether through media interviews or interactions with community leaders.

Spokesperson of the Year Award
Steve Fourez embraces the opportunity to speak out for agriculture. A past

farmers in local media and with elected officials. As an Illinois Farm Bureau

director, he took agriculture’s message across the state. He’s just

completing an eight-year term on the Vermilion County Board, sharing

agriculture’s concerns on county policy. He now serves on the IL Corn

Marketing Board, where he represents local farmers’ interests promoting

Ag in the Classroom Teacher of the Year
Cindy Cheney-Hunter is the sixth generation to live on her family’s farm.

She began teaching five years ago, once her youngest (twins) entered

kindergarten.  For the last three years, she has taught first grade, which

always featured Ag in the Classroom (AITC) in her curriculum – including

middle school level this coming spring. She's shown above on the left

Smith Stepping Down as President

During the meeting, Dennis Smith was regcognize as he retires from the president's position after reaching his eight-

year tenure mark. Dennis was first appointed to the board in January 2007 He served for seven years on the executive committee as treasurer. When Dave Sadler completed his term as president at the end of 2014, Dennis stepped in to lead the organization. During his eight years as president, he was on the Illinois

anniversary celebrations, and helped Farm Bureau face the challenges as

they came along during those years. Vice President Milton Dalenberg